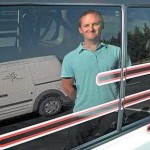 What do you do and how long have you been doing it? I coordinate about 10,000 deliveries a month throughout Southern Oregon — 200 miles in every direction: Lakeview, Eureka, Redding and Roseburg. We fly and truck things all over the Pacific Northwest every day, contracting with other companies. I started in 1998 with one car and built up a network of drivers, sending and receiving locally and throughout the state, delivering anything from car parts to body parts.
How long have you lived in the Rogue Valley? I’ve lived here all my life and I attended Crater High School.

What inspired you to go into this line of work? Opportunity mostly. I knew I wanted to own a business. I tried a couple of failed ideas first — one doing bulk mailing. I saw a courier service going out of business and jumped in to fill their niche. I thought it would be a fun line of work and easy to learn.

What decision or action would you change if you could do it again? I would have learned more about the industry earlier on. I was right about it being fun, but wrong about it being very easy. Driving around running errands is easy, coordinating a profitable delivery service is very difficult. Most companies fail, including the one I had bought. I’ve watched about 20 more fail since then here in Medford. If I hadn’t been young and able to work long hours for no money for several years, I would have failed too.

What’s the toughest business decision you’ve made? Whether to use employees or subcontractors. The majority of successful courier services use subcontractors and personal vehicles; it’s much less expensive but leads to abuse and cutting corners. It’s hard to keep the quality high when each driver is their own boss. However, with employees and owning your own fleet, your costs are so much higher that it’s hard to compete. Until I could build up my fleet, I learned to live on very little money — surviving on $800 a month for a long time. Ultimately, I decided I’d rather make less money and make fewer apologies, so I went with employees.

Who are your competitors? Senvoy, out of Portland, and OnTrac, out of Phoenix, Ariz. They are based in big cities and have much larger networks. They are both multistate operations. One of our big competitors over the past 15 years was just recently auctioned off in bankruptcy court, Pacific Courier Services.

What are your goals? We’d like to get more volume between Medford and some of the cities on the edge of our network, such as Lakeview, the coast and Portland. That’s about as far as we want to go, now we want to fill the areas within that range. We always lose money when we bring on a new region, and the goal is to build it up as fast as we can. We did Klamath Falls five years ago. We had two drivers there, and it took about a year to make it worthwhile.

What training or education did you need? I needed more than I had. Once I realized this was more complicated than I thought, I started traveling out of state to meet other courier owners. I was young and ambitious, but since I was from Oregon, they didn’t see me as a threat, so they were willing to share their processes with me. I also learned the problems they were facing, and I was able to pitch a few solutions to a software company and that helped both of our companies. I was able to adopt the tried-and-true methods from the older companies and apply them to the new technology. If I hadn’t time to learn on the job, I would’ve needed a degree in supply chain and logistics management and then spend a couple of years as a dispatcher.

What’s your advice for budding entrepreneurs? Keep your personal expenses low and put whatever you earn back into the company. Find other businesses in the region doing what you want to do and learn from them. The Internet is more powerful now than when I was learning, but the face-to-face meetings are much more valuable.
Dash featured very briefly on Medford news.